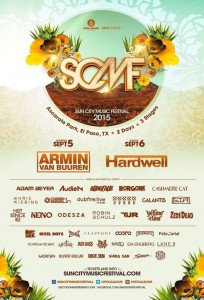 When you think of major music festivals, El Paso is not exactly the first place that comes to mind. But it’s in this unsuspecting border-town, known primarily for their iconic underground scene and massive parties reveled by DJs all the world over, that the Sun City Music Festival was born.

Now in it’s fifth year and boasting it’s most diverse lineup to date, SCMF has further cemented itself as a staple in the American electronic music scene by becoming the largest electronic music festival in the Southwest, drawing nearly 40.000 fans in 2015 – a dramatic increase from the 15,000 attendees only 5 years prior. Held in El Paso at the historic Ascarate Park, the two-day festival plays host to over 40 international DJs playing across three stages and headlined by Dutch superstar DJs Armin Van Buuren and Hardwell.

From the moment you drive into Ascarate Park, you know there’s something different about SCMF. Everything seemed to run like a well-oiled machine. The parking was organized and easily assessable, the staff was courteous and helpful, and the ticket line to get into the event ran quickly and without incident. It’s incredible to me how many festivals get these minor details very wrong, and yet it’s these same details that set tone for the entire night.

Once inside it was hard not to be completely spellbound by the sights and sounds coming from the mainstage. Larger than years past, the mainstage was adorned with gigantic LED screens, a unique diamond pattern of lights which hung above the DJ booth, and one heck of a sound system. The night started off with an opening set from local DJ Johnny Kage, after which New York DJ and XMRadio host Liquid Todd truly set the tone for the night and the mainstage performers to follow, which included Audien, Robin Schulz, GTA, and DVBBS.

While the energy at the mainstage was electric to say the least, mainstream house and electro aren’t everyone’s cup of tea, so we ventured off from the madness, immediately heading to the Beatport stage where local El Paso talent Laffit and Austin native Andrew Parsons were warming up the crowd as Anjunadeeps’ Lane 8 was preparing to take the stage. While I’m not particularly fond of deep… well anything really, Lane 8 made me a fan as he played 90 minutes of deep techno, so beautifully arranged, it coincidentally ended up being my favorite set of night one. After Lane 8, Claptone donning his iconic gold mask, turned up the tempo and set the crowd ablaze with a bass-heavy, high-energy tech-house set that drew one of the largest crowds of the weekend to the Beatport stage. Hot Since 82 kept the energy up with his signature tech-house sound, and El Paso favorite, Dubfire, closed down day one on the Beatport stage with his special live performance set, Hybrid.

Back at the mainstage, Dutch trance legend Dash Berlin took over, filling the crowd with a mix of big room house and classics before finally passing it off to Armin Van Buuren who closed out night with an epic performance not soon to be forgotten.

As we arrived for the second day of SCMF, you could already hear the bass-driven tech house coming from the Beatport stage as Shiba San started off the night.

While the mainstage lineup included acts like Nervo and Hardwell, day two for me was all about the Beatport stage. No crazy lights, confetti, or CO2 cannons needed- just some very good speakers, and a bunch of people dancing to some really good music. Swedish DJ Ida Engberg took the stage after Shiba San and wasted absolutely no time, playing a hard and heavy set from beginning to end. With very few female DJs able to gain the level of notoriety as their male counterparts, Ida shows why she’s one of the best techno DJs in world. Following Ida was fellow Swede and partner, Adam Beyer. Like Ida, Adam went full throttle from the beginning, playing a very dark and bass-driven set, the type of set you’d only hear in a place like El Paso. For many I talked to that night, there was no way one would think Chris Leibing could follow a set so extrodinairy, but from the first note, it became incredibly apparent that things were about to get very weird. With a “take no prisoners” attitude, the music just got darker, dirtier, and more intense, taking the crowd on a journey and completely losing track of time, the way only Chris Leibing can. Before you knew it, and without warning, a barrage of fireworks clouded the sky marking the closing of night two.

After living for El Paso for so long, and moving away, it definitely opened my eyes to how amazing and truly unique the city is. It’s the people in El Paso, and it’s sister city of Juarez, that make Sun City Music Festival what it is. It’s a music culture that shows respect to the talent that grace its’ stages, and respect for everyone around you. You don’t see people out of control like you do at other festivals; the ones who attend, are there for the music. Which is also one of the huge reasons SCMF can get away with being one of the very few remaining “all age’s” festivals. It’s very normal to see children in attendance, chaperoned by parents who grew up going to shows as well; and believe me when I say, these kids in El Paso and Juarez know more about the music than most people twice their age.

What’s most important about this city is the energy. Envied by many and imitated by none – it’s electric, magnetic, and unlike anywhere in the world. It’s the reason why El Paso and Juarez are so respected by DJs around the world, and come back without hesitation. Don’t believe me? Just peep the hashtag #ElPasoKnowsHowToParty on twitter or instagram, and you’ll see for yourself why this city has such an amazing reputation behind it. I can go on forever about my love for this city and how amazing this festival was, but its’ reputation speaks for itself. Sun City Music Festival is, in my eyes, the hidden gem of American festivals.